I am not a big fan of writing. What I mean is I’m so used to typing on my computer’s keyboard, that using a pen or a pencil is a bit cumbersome.

Anybody else feel the same way?

Recently at my school, we implemented an intervention system to try and lower the number of students arriving late to class (tardies).

We would keep track of how many times a student was late, and if they reached three tardies in a trimester, they would be sent to me, and I would have to assign them a detention.

The problem is that I had to fill out each detention slip – BY HAND!

It was driving me crazy.

I decided to do something about it.

I did some research and learned a little computer programming. I created an online form that would print out PDF versions of the detention slips. It saved me so much time. Other people in the office started using it as well.

I thought, “What kind of form could I create for teachers to help them save some time?”

That’s when I came up with the Concern Letter Generator.

As you know, involving the parents is so important to the success of as student.

Unfortunately, finding time to make the phone call is not that easy.

With the Concern Letter Generator, a teacher can fill in some boxes on a form, and the program will create a PDF letter that he/she can hand to the student to take home, or that can be attached to an email to the parents. 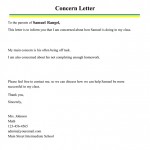 I made such a form for my teachers, and those who used it were grateful for the time-saving tool.

I  thought there might be some other teachers out there who might be able to use it, so I decided to add it to the SITC site.

Go ahead and give it a try. It’s free.

Let me know if it is something that you can use.

Is there anything you would like added to the form?

I’m open to any feedback.

I plan on adding other teacher forms in the future.

Click Here to go to the Concern Letter Generator.