It’s been a while since my last post. All of a sudden, you’ll find as a teacher, things just pile up on you and you have no extra time.  Your prep periods are taken with grading an important project or meeting with parents, etc. Well, now that I have time to post, I wanted to tell you about a project I tried for the first time. A good teacher is always looking for new ways to teach the old subjects. You know you’re ready for retirement when you are doing the same projects that you’ve been doing for the last ten years. I never want to get that predictable.

I wanted to have my class learn about what life was for a Civil War soldier, but instead of just lecturing or giving them book work, I created a project that I call “Build a Civil War Soldier.” Next year, I’ll probably call it something more clever, but this was almost an experiment for me. What I had the students do was watch a video on life as a Civil War soldier – It’s Discovery.com video called, “Foot Soldiers – the Yankees.”

As they were watching the video, they were supposed to write down important facts about the soldier’s life. 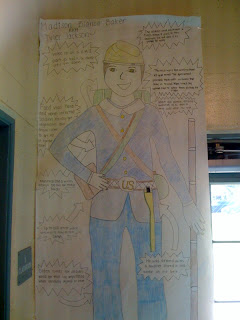 Once the video was over, I divided them up into groups. (I’ve tried different ways to group my students, but the best way that I’ve found is randomly. I’ll discuss grouping in a later post – maybe.) Once they were in their groups, I passed out long sheets of white butcher paper (about 6 feet). Then, each groups was to select one student to lay down on the butcher paper while someone else traced their silhouette. (This, I found was a lot more difficult that it sounds.)

Once the form of the student was on the paper, the group then proceeded to draw a face, a uniform, guns, etc. They even gave their soldier a name. Then they would write the facts that they took from the video all around the soldier. They then took turns presenting it to the class.

I was a little nervous that this project was going to be a flop. (Yes, I’ve had projects that have flopped. Every teacher has lessons that bomb. Don’t stress about it. It’s part of the learning process.) This project, however, worked pretty good. I even posted the better soldiers around the hallway by my class. I told the kids that our hallway was being guarded by Civil War soldiers. The kids enjoyed it. It got them out of their chairs, and they actually learned a lot. I’ve uploaded a picture for you to see. You could probably do this with almost any topic – characters in a story (Language Arts), a famous mathemetician or scientist, etc.

I’m sure I’ll be doing this project again in the future.

Today’s Tip for New Teachers: If you’re doing a new project, try and do it with your highest achieving class first, that is your Honors or Upper Level class. The reason I say this is that they will most often give you the best work. Students in those classes seem to compete with each other for quality and creativity, so they will give you the best “sample” work for you to show to your other classes. You want to show the best examples for the other classes to shoot for. This is what I did with the Build a Soldier project. I had my non-honors classes see samples from my honors students before they started working. It gave them something to aspire to.

That’s all for today,

Informational
Testing is Over
The End of the Year