The Job of a Teacher – Help Every Student Get an A

I was listening to the Dave Ramsey Podcast, EntreLeadership, and I ran across the episode with Tony Dungy, the former head coach of the Tampa Bay Buccaneers from 1996 to 2001, and head coach of the Indianapolis Colts from 2002 to 2008.

I heard something Tony say that made me want to share it on the SITC blog as soon as I could.

It actually was something Tony’s father said.

Tony’s father was a teacher, and one thing that Tony remembers him saying is that his job as a teacher was to help every student get an A.

Tony states that his job is to make his players better. This belief was something that was instilled in him by his father, and it is so true.

Think about Tony’s father’s statement: My job as a teacher is to help every student get an A.

I wonder how many teachers have adopted this belief.

In my experience in education, most teachers believe this.

Unfortunately, I have heard so many teachers say, “If the student chooses not to learn, then it’s their fault that they get the F.”

I know I don’t agree.

Do some students fail? Yes.

The question is: “What have I done to help that student not fail?”

Did I do everything possible to prevent that student from getting a poor grade?

Did I do enough to help that student get an A?

Did I just run out of year?

I’ll say it loud and clear: If a teacher has more than a few students failing his/her class at the end of the trimester or semester or year, there is something wrong.

Students who fail a class have been failed by the teacher.

Something that is often mentioned on the Dave Ramsey podcast is that the purpose of a leader is to help the team members succeed. If there is a problem with a team, it’s because of the leader. The leader is the problem.

The hope, however, is that the leader is also the solution.

It is the same with education. If there is a problem with the class, the problem is the teacher.

There I go again, blaming the teacher. Who else can I blame? The kids? Their parents? The community? Poverty?

I know some teachers who would blame everything listed and more just to be able to not accept the responsibility for the poor performance of their students.

Your job is to help every student get an A in your class.

If you can adopt this belief, you will transform into being the solution to the problem in your class.

Your kids are looking to you to help them be successful.

Yes, it will take some time and effort on your part. It will cause you to get frustrated with the lack of support you’ll get from their parents. It will force you to be more creative with your lesson plans, but when the year is over, and your students have demonstrated success, it will reflect directly on you and your ability to inspire your kids. 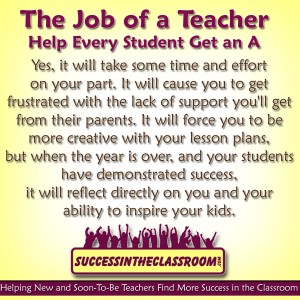 Many teachers have the misconception that a failing grade in a student’s report card is a reflection on the student.

In actuality, a failing grade reflects on the teacher.

Like Tony Dungy’s father said, “My job is to help every student get an A.”

I challenge you to take a look at your grade book today. Count how many students are receiving D’s and F’s.

What does that number tell you?

Are you doing your job as their teacher?

Remember, you are doing work that matters. Your efforts are having an effect in the future.

Thank you for all you do for our kids!