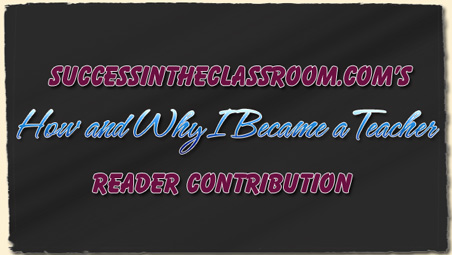 A few posts ago, I asked my readers if they had a story about how and why they became a teacher.   I received this submission a couple of days ago from Roderick Woodward. I found it a great read. Thanks Roderick!

My name is Roderick Woodard and here’s my story on how I’m achieving my dream of becoming a teacher.

I’ve wanted to be a teacher since I was 5 years old. I remember playing school with my cousins and when I was 8, I made the decision that I was going to be the best teacher I can be!

I always believe that God does things in mysterious ways, and my dream of having my own classroom came to me in a dream in 4th grade and ever since then nothing’s holding me back!

After graduating with my AA degree in 2008 and after spending two semesters at Florida Gulf Coast University, I stopped going to school because of hardships. But I still remembered my dream of wanting to become a teacher, so I decided that since I had an AA degree to begin looking for a job with my local school district (by the way I’m from Arcadia, Florida). I spoke with a teacher at my grade school alma mater Memorial Elementary School and she informed me that they were looking for a person to work with the students in their After School Program. I thought to myself, no, don’t do this! But then a voice said “Go for it!”. So I emailed the Assistant Principal and she told me “you should’ve came to me earlier”. After talking with her, she said “you’ll start on Monday”. I walked out of her office that day on cloud 9 and called my mom and told her I got a job and she was beaming with excitement (I could tell by her reaction on the phone). While I was working part-time in the after school program at Memorial, I was told about a PE Paraprofessional position at the same school, and I immediately had my name submitted for this position, and since I already had my AA degree, I didn’t have to take the Parapro test!

I had an interview lined up for the PE Paraprofessional position and I didn’t get it the first time, but I didn’t give up! I was working after school and the Assistant Principal comes in and says “the Principal needs to see you”. I went to see the principal and she asked “are you still interested in the PE Pararprofessional position?” and I stated “Yes Ma’am, I am”. Then, she asked me, “would you be willing to replace our current paraprofessional?”. She gave me until the next day to think it over and I came in and said “YES, I will”. Once the paperwork was completed, I was cleared to start on Monday, November 9, 2009.

On my first day, I was asked by my PE Paraprofessional counterpart if I would work with the Kindergarten students in Health and I said “sure”, not knowing that I would have so many energetic students. After my first day, I started reading books and internet articles on classroom management and immediately implemented the strategies I learned and after a month, KG health became my favorite group to work with because I began to see the growth and progression in each student. At the end of the school year in 2010, I was moved to Desoto Middle School because of budget cuts in our district.

(On another note, I started going back to school at Ashford University (Online) in March 2010 with a major in Social Science with Education Concentration)!

Moving on–My first day at Desoto Middle School (by the way, I was a student from 1998-2001) was a completely different ball game. But once I got to know the students (many of them of which I worked with in past years), it became an experience to enjoy! I will enter my third year as a paraprofessional in August!! 🙂

I’m graduating from Ashford University this Fall, with the goal of becoming an elementary school teacher. I will take all I’ve learned as a paraprofessional and go out and be an effective teacher!!! 🙂

Thanks again Roderick. I expect that you will have a great career making a difference in countless of students’ lives!

Do you have an inspiring story on how and why you became a teacher? Send it to me, and I’ll post in on SITC.