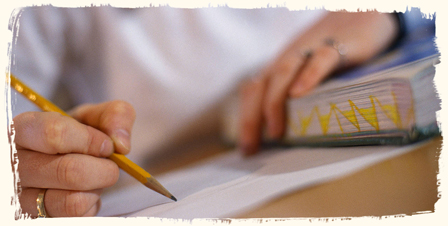 Tests can be a stressful time for students. Some students are just bad test takers. A lot of times, however, the students just don’t take the time to study for the test, or they study the wrong way.

To help alleviate some of the “test stress,”  I always include a “freebie” at the end of the exam. A “freebie” is  a question that has nothing to do with the subject of the test. It’s normally just a question like, “Which is correct: 6 and 6 is eleven or 6 and 6 are eleven?” The students will most often choose “are,” but the correct answer “neither, because 6 and 6 is twelve.” Another one I like is, “Johnny’s mother had four children. The first was named, April; the second was named May; the third child was named, June. What is the name of the fourth child”

Did you get the answer right? If you said July, you’re wrong. The answer is Johnny. If you read the question again, you’ll see that it starts with, “Johnny’s mother had four children…”

A lot of the times, the students spend more time trying to figure out the “freebie” than the real questions.

I tell them that if they get the “freebie” wrong, it doesn’t hurt them, but if they get it right, it’s an extra point.

You can find these brain teasers online. Just do a Google search for brain teasers. Maybe I’ll compile some of the ones I use in a future post. That’s a good idea. I just thought of that.

Again, I want to do what I can to make the tests in my classroom a little less scary. “Freebies” help to add a little bit of fun to the day of the exam.

What do you do to make tests less stressful?