Let’s Talk About Me – Getting Your Students Motivated 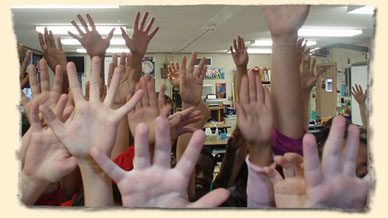 Today I was reminded about one of the tips that I give my student teachers. If you want to get more students interested in an assignment, have it revolve around them.

I wanted to give them an assignment to reinforce the information we were learning about the Texas independence movement, but I didn’t want to give a boring notes review assignment.

I went back a few years, and I found an activity that seemed interesting, so I tried it yesterday.

I call it My Name In Notes.

What the students do is use their name to create an acrostic that reflects the information from their notes. For example, if their name is Sam, they could do something like:

M – Mexico – Americans came to live in the Texas territory of Mexico.

Today, the students came in with their final drafts.

Almost all the students brought in their homework. The turn-in rate was unusually high. It caused me to wonder why.

I didn’t have any plans on having them present their papers in class, but a lot of students asked if they could. I was so surprised that so many students wanted to volunteer to share their work. So I let them.

It wasn’t that interesting. In fact, it was a little boring. They all were basically sharing the same information, just in different ways depending on the letters of their name.

It was interesting, however, that the students were begging to be the next one to present.

Like I said, it reminded me of what I tell my student teachers: Let them talk about themselves, and they’ll have a higher motivation to complete the assignment, and not only that. They’ll want to share what they’ve done with others.

Because we all like talking about ourselves. We don’t do it, because it makes us look conceited, but we like it. We want to let people know all about us. We want to toot our own horn. We want people to say, “Wow!”

Too bad our society doesn’t allow us to do that, because I really think I’m pretty amazing. (You didn’t hear that from me, however.)

So the next time you have a review assignment planned, don’t give your students another boring worksheet. Come up with an activity that allows your students to talk about themselves and review the lesson at the same time.

Your turn-in rate will be higher.

Informational, TNT (Tips for New Teachers)
CFIS Philanthropic Society – The Journey – Part 10 – The Big Day Finally Arrives
Look What I Found in the Archives of Other Teachers!