Is Your Heart Bigger Than Your Hammer? 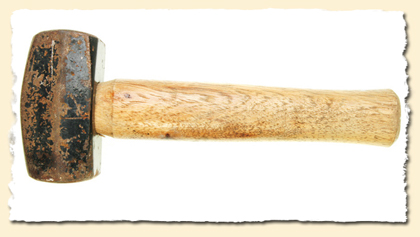 As I’ve mentioned in an earlier post, I’ve been filling in as an administrator at another school while I’m on vacation. Basically, I’m helping with minor discipline problems and with monitoring the students before and after school and during lunch.

Today I had one of those moments that I’ll remember for a long time.

A student was brought into my office for talking too much in class. She was even brought in by the security guard.

The teacher sent a message with the security guard that basically told me to hammer the student. The teacher was evidently frustrated with the behavior of the student, and he wanted me to give her a consequence that was going to really teach this girl a lesson.

I’ve learned that as an administrator, one thing I have to try and do is show support to the teachers, so my first inclination was to go ahead and give the student a tough consequence. I was assuming that because the teacher had taken the time to call the security guard to escort the student to my office, the student had really gone over the line.

The security guard left, and I began to get the girl’s side of the story.

Students who are in trouble, I’ve found, will paint themselves in the most innocent light possible, and they’ll lay all the blame on the teacher.

This girl, however, admitted to talking too much in class. She felt that she wasn’t talking any more than anybody else in class, but she didn’t deny it.

I started thinking about the size of my hammer. What punishment was I going to give this student to teach her a lesson?

I decided to give her ACP for the rest of the week during the teacher’s class.

It’s not really a big consequence, but I thought it would be an adequate lesson.

Then she told me that she wouldn’t be at school for the rest of the week. This happens to be the last week before the students leave for their three week Christmas break.

I asked why, and that’s when she started to tear up. This totally caught me off guard.

She said that she was going to see her mother in Mexico.

It turned out that she hadn’t seen her mom for over a year. The mom had been deported.

Even though the student was born in America and spoke perfect English, her mother was not a citizen and was forced to leave her family behind a year ago when she was discovered. The student told me that her father didn’t live with her, so she was living with her grandparents.

I put away my hammer and moved the Kleenex box closer so she could dry her eyes.

We spoke a little, and I reminded her that her mother would much rather hear news of her successes than of her getting in trouble. She agreed. It was a good conversation, and I almost had to move the Kleenex box back to my side of the desk.

I said, “If you’re here tomorrow, come see me, and I’ll have you spend a period in ACP, but if your not here… give your mom a big hug.”

Then I sent her on her way.

I could have had her spend her lunch in ACP, but I didn’t.

The teacher may not be too happy with me. I didn’t support the teacher in this case. I didn’t hammer her. Does that make me a bad administrator?

If there is any lesson that I could take from this to offer to new teachers, it would be to be easy with the hammer. There will be times when you’ll have to make your point, and follow through with your threats of consequences for poor behavior, but try and take some time to see if there are any underlying reasons why the student is not paying the attention that you require. Could there be something else on the student’s mind, like parents who are in the middle of a divorce, or a recent death in the family, or a mother who is not there?

I wish I could be there when the student meets her mom. I’m sure there will be some empty Kleenex boxes there.