Only One Rule: Respect – Part 1 – Changing Your Classroom, then the World

In a post I wrote about a year ago, I stated that there are only two rules: Respect Yourself and Respect Others. I gave examples of how following these two rules will keep students from disrupting the class or cheating or calling others names, etc.

Recently, I’ve come to the conclusion that we can narrow our school rules down to just one: Respect.

Only One Rule: Respect

I know many teachers start their year off by going over the rules of the class.

No chewing gum
No talking when the teacher is talking
No bullying
Keep your hands and feet to yourself.
Follow all school rules.

I did this for years.

What I learned, however, was that all of my rules really had to do with showing respect. I didn’t need a Rules Poster if I just made respect an integral part of my classroom environment. 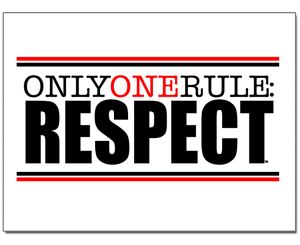 Over the years, I’ve learned is that many kids don’t even know what respect looks like. They’ve heard it again and again, but they haven’t been able to connect the word to real life.

That is why I believe it’s important to not only define the word to our students, but like any abstract concept, we need to give examples of what respect is, and how our actions can either show respect or disrespect.

Respect has to be made tangible to students. It can’t be something that just referred to in a lecture on good behavior.

There has to be a high value placed on respect in the classroom. Students need to know that respect is something very important to the teacher – something to be protected and defended.

The teachers needs to convince the students that respect is like a treasured family heirloom. It might not have monetary value, but to the teacher, it’s priceless.

Unfortunately, in most of our classes, the word, “respect” is just some concept that really has no significance to the student. We adults understand the concept, but students need real life examples to truly understand its value.

I believe that if a teacher has a conversation with the class about respect – what it is, how it’s demonstrated, and how important it is, he/she will have fewer behavior issues throughout the year. Imagine if there were fewer behavior issues in your class. How much more learning could happen? How much more pleasant would it be in your class? How many more students would be successful?

It’s all about making RESPECT the only rule in your class.

Students, once they grasp the importance of respect, will look for ways to not only avoid showing disrespect, but ways to demonstrate more respect.

Imagine how this could affect not only your classroom, but your school? Your community? Society?

If you watch the evening news, you can boil down all the major conflicts in the world to a lack of respect of some kind.

If the classroom is truly the place where our future leaders are being developed, let’s start making RESPECT a focus.

We can change the world!

OK, I’m getting a little carried away, but you get the point.

Teacher: “OK kids, we are going to go over the classroom rules.”
Students: (Groan)
Teacher: “Actually, there is only one rule.”
Students: (Silence)
Teacher: “Yes, we only have one rule: Respect.” (Pause) “What is respect?”

Students: (Students offer their ideas of what it means to be respectful.)

Teacher: “Those are all good examples. What does the dictionary say? According to the dictionary, respect is a feeling of admiring someone or something that is good, valuable, important, etc. So what does that look like in our classroom? Let’s say I’m explaining the directions for an assignment that we are going to do in class. All of a sudden, someone starts talking to their friend about what was on T.V. last night. Is that person breaking a our rule of respect?”

Students: “Yes, because that person who is talking is not respecting you.”
Teacher: “Very good. You’re right. That student is showing that what I’m saying is not valuable. Is there another rule of respect that is being broken?
Students: (Confused silence)
Teacher: “What about the other student? He was listening to the directions until the first student got his attention by talking to him. Right? Was that a little disrespectful to that student?”
Students: “Yeah.”
Teacher: “So the Respect Rule was broken twice. Any more?”
Students: (More silence while they think)
Teacher: “What about that student’s parents? They send that student to school to learn, but that student has chosen to not pay attention to me while I’m giving directions. Isn’t that student being disrespectful to his parents?”

You get the idea.

There are so many ways to teach the Only One Rule idea.

Like I said, this can be a great and meaningful conversation on that first day of school. It can set the climate for the rest of the year.

It doesn’t have to wait for the beginning of the year, however. You can have this conversation the next time you see your students. It’s OK to start again in the middle of the year.

I believe teachers have a great opportunity to not only change their classroom, but to have an effect on the future by teaching this concept of respect.

Thank you again for all you do to make a difference in the lives of our kids!