This is the third installment in the series where I show you how to make amazing and attainable goals using the Amazing Teacher Goal Creation Formula.

Creating amazing goals is the first step to attaining success in the classroom. In the last two parts, we’ve come up with a pretty amazing goal:

No students will receive less than a B in my class.

So, what is the next step in the Amazing Teacher Goal Creation Formula?

You want to focus on what you want; not what you don’t want. There’s something about a positive goal that is easier to get excited about.

Right now, our goal has a negative feel about it. The words, “No” and “less” are closer to the negative end of the positive spectrum.

So, how can we make the goal positive?

Every student will receive a B or better in my class.

Being positive is a common characteristic of the amazing teachers who I have known. You seldom see an amazing teacher focusing on what’s wrong or the negative. Why not make your goal for the class a positive one? 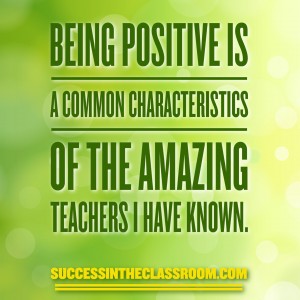 In the next post, we’ll learn about the fourth part of the Amazing Teacher Goal Creation Formula.