This is the fourth installment of the Amazing Teacher Goal Creation Formula.

In part one of the formula, we’ve identified what success looks like.

In part two, we made the goal an amazing one.

In part three, we made our goal positive.

Now, in part four, we add a finish line to our goal.

Our goal, as is stands now, is not time-specific at all. We assume that we’re talking about the end of the year, but it’s not stated. So, let’s state it:

Deadlines are important when making goals. Again, I’m not sure how this works, but when you set a date for the accomplishing of a goal, somehow you reach the goal. I set a goal to finish my book, “How to Nail the Teacher Interview,” for the end of the month, knowing that it was going to be a miracle if that happened, since I’m so busy. Guess what happened? Yup. I had it for sale on Amazon.com exactly on day 1 of the next month.

If you set your goal without a date for completion, then it’s easy to get discouraged when time passes and you don’t see progress. You “lose your faith.” After two weeks, you begin to doubt yourself. After a month, you begin to think of other, easier goals to reach. After three months, you don’t even remember your goal, because you feel it’s taken too long.

If you’re following this part of the formula, however, you know that there’s an end date that you have to reach before you start the doubting process. It’s like a marathon runner. If you don’t know when the end of the race is, it will be easier to quit, but when you know there’s a finish line somewhere in the distance, you focus on that spot, and you keep running.

Setting a date for the achievement of your amazing goal is essential to you reaching it. 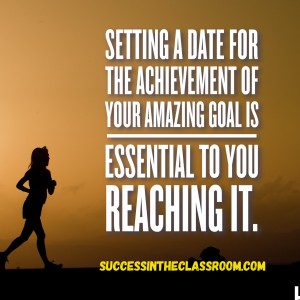 At the end of the semester, I will contact the parent of every student in my class by phone or email and receive a response.

By setting a date for completion of the goal, we are able to see the finish line, and as the deadline that we have imposed approaches, we start focusing more on our goal. We start taking action to reach the goal. We start “running” with more determination. Also, I don’t know how it works, but help always seems to arrive when you least expect it. It’s like there are outside forces that want you to achieve your goal as much as you do, and they help you get there.

That sounds really out there, I know, but it happens, and it’s pretty cool.

We’re about half way to the finish line of our Amazing Goal. In the next step, I’ll show you how to put your goal on steroids.

Part 5 is where the magic happens!