This is the fifth installment in the Amazing Teacher Goal Creation Formula series.

Again, our objective is to create a goal for success in the classroom.  We’re not creating just any goal, however. We’re creating amazing goals. That’s what we do. Amazing teachers create amazing goals.

In part one, we identified what success will look like.

In part two, we made our goal amazing.

I part three, we made our goal positive.

In part four, we made our goal time specific.

Now, we’re going to really make our goal powerful. Part five of the Amazing Teacher Goal Creation Formula is where the magic happens.

Once you learn this, you’ll never make a goal the same again.

The fifth element of the Amazing Teacher Goal Creation Formula is:

Make your goals as if already accomplished.

How do you do that, Sam?

It’s important to see your goal already accomplished. You have to visualize what it looks like, and write your goal as if you are writing it in the past.  It has to be already accomplished in your brain for it to have an effect. I know you’re thinking that this is kind of out there, but hang in there with me. Like I said, this stuff works.

Let me show you what I mean.

Our new goal, written as if it has already been accomplished is:

Now that’s a powerful goal. Do you see the difference? Before implementing this fifth element of the formula, the goal will happen sometime in the future. Now, it has already happened, at least in our minds. It changes our goal from “maybe” to “done.”

It’s like you are seeing your success already assured. You start to visualize the event in your mind. It provides you with more motivation, especially on those days when you really don’t believe Johnny will ever get on board.

Some other “finished” future goals can be:

At the end of this week, I have finished reading the professional development book I started.

At the end of the month, every parents has been contacted either via email or phone.

It’s a small change to our goal, but making it’s a powerful change.

When you visualize your amazing goal already achieved, you begin to believe that it’s achievable, and believing is essential to your success. 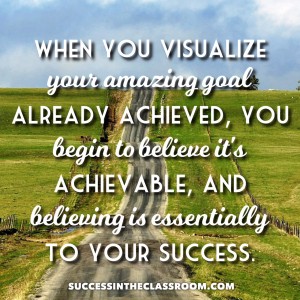 Three more parts to go. In part six of the formula, we’ll get a little emotional and really make our goal amazing!